Climate change and development goals cannot be pursued separately. Their interrelatedness has finally been recognized by including climate change as an SDG. SDG number 13: Take urgent action to combat climate change highlights an important milestone as the issue was not addressed through the Millennium Development Goals (MDGs). Eyes are now on the Paris climate talks later this year where the new international agreements aimed at keeping global warming below 2°C will be determined. A warming climate will impact the availability of freshwater, food security and energy amongst other necessities.

This is already being observed globally with countries experiencing changes in rainfall, more flooding, droughts, intense rain and more frequent heat waves. There is a common responsibility falling on all states to protect the environment, while recognizing the different circumstances each state faces in their ability to tackle the problem. This responsibility should be extended to companies where action needs to be taken in accordance to circumstances and potential.

SDG number 13 has set out a number of targets, stated below, which countries need to now take ownership of and define the specific responsibilities and targets befalling them.

The global targets set for SDG #13 are: 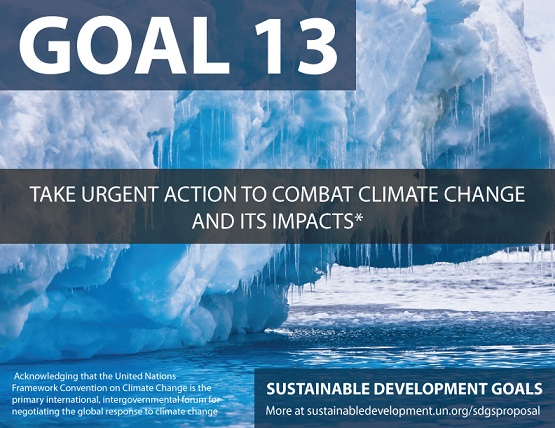 So what can companies do?

The role of business is picking up but there is an overview that it is not enough. There are many types of risks facing businesses including climate change policy risk, reputational risk and market risks. It is in businesses best interest to act fast to reduce this and seize opportunities like new investments or new revenue streams. HSBC has already realized the potential of this field and has created new climate change indices that can be invested in through the bank. Further benefits are outlined in Citi’s report, which states that $2 trillion savings will be generated if we move towards a low-carbon economy. There are many interrelated actions companies can take and are already taking in responding to SDG #13.

In closing, to tackle SDG number 13 there is one element that stands out as being absolutely crucial to the achievement of the goal, which is to take urgent action.